Showing posts from October, 2013
Show all

Keeping The Kid from shrinking

- October 27, 2013
This is a hard post for me to write because I know sexism is alive and well in American culture. I've witnessed it first hand, and women are just as likely to be the perpetrator as men. I've watched female colleagues labeled as obstinate and problem employees for expressing the same concerns in the same meeting that I have expressed, when I walk away unscathed by criticism. Our collective sexist culture exists in families as well, where sons can do no wrong and daughters are told to stop provoking their brothers. There are multitudes of statistics and studies that point to male bias in the workplace and in families as well. I am not here to debate that, although I still have trouble wrapping my mind around the alleged superiority of one gender over another. Instead, I'm trying to learn how I can help my daughter from feeling that she needs to shrink herself, or deprive herself in order to keep the peace in the workplace or in a relationship.  All women deserve a cha
Read more

Year one with The Kid, the start of an amazing life as a family 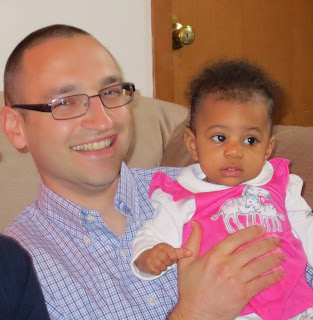 One year ago, I was running to the Target in the Eastland Mall because we needed a camera fast.  I woke up that morning, realizing that we would always want to remember that day with better photos than we would get from our smartphones. I was on a conference call for work as I ran through the store, half paying attention because I needed to hurry back to pick up Gladys so we could get to Catholic Social Services of Wayne County in time for our meeting. I didn't want to be late for our first chance to meet The Kid. Gladys and I were both nervous. We had seen a few pictures during our last visit with our social worker, and we had the family history the agency was allowed to release to us, but we didn't know a thing about The Kid's personality. Was she shy or playful? Would she be scared or was she curious about her surroundings? Would she cry when she met us or would she warm up to us? Would she like us? We agreed to try playing it cool when we met her. We wouldn'
Read more
More posts