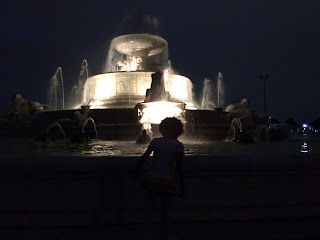 A colleague made the observation that people who are from Detroit, if they still live in the area or not, seem to always refer to the city as home in a way she's never experienced in the states.

It was an observation that makes sense to me, and while I wasn't born here, Detroit is home. If we ever leave, and I have no idea why we would, I would be one of those people my colleague was referring to, one that will always call Detroit home. This sometimes crazy, often misunderstood and always underestimated city has a way of working its way into your heart.

After 15 years of living in the city, it is also easy to become stuck in a routine and stop observing the little things that make the city beautiful. This is where The Kid comes in. She doesn't have my baggage and doesn't care about the history. When I remind myself to put down my phone and start watching her experience the city, I become even more impressed with this place.

Monday night was a great example of that. I've driven past the Scott Fountain on Belle Isle more times than I can count, and we had driven out that night to see the city skyline just before the sun set for the night. As we were walking back to the car, she saw the fountain and insisted on running around the reflecting pool to get to the fountain.

I don't remember ever seeing the fountain with colored lights and the effect of the lights was mesmerizing. It was worth the sore hamstrings I gained the next day to see the fountain, and the look on her face with each new color combination. It was worth her tears as we left because we were already late for bedtime, because the beautiful fountain was all she wanted to talk about on the way home. It was worth it because of the excitement in her voice, and the chance to experience home in a new way.

Today evoked similar feelings. The Kid is on a two-week break between summer camp and the start of pre-school, so I took today off to spell grandma, who is helping us fill in our child-care gaps. I did my best to ignore my phone, and just watch her experience more the city for the first time.

Watching her politely interact with the owner of Motor City Java & Tea house, dance while The Vonneguts played at Campus Martius during lunch with Momma, get drenched in the fountain on the Detroit Riverfront behind the RenCen and ride the carousel at Rivard Plaza did my heart good. I know we have a good kid on our hands, with a creative mind and a tender heart. I know we live in a city that has a lot going for it if you stop long enough to look.

I have a front row seat to the city's issues, and there is no minimizing those issues. I also have a front row seat to the work being done to make our city government work better for Detroiters. What I haven't done enough of is take advantage of a three year-old's front seat perspective of the city. I'm glad I've been doing more of that lately, and rediscovering some of what makes this city feel like home.