Arming my daughter against the misogynist disguised as an ally

My feelings about who The Kid will become as she becomes an adult are complicated. She's a few days shy of her fourth birthday, so I have plenty of time to worry.

What I really want for her is to become a loving, trustworthy, kind, emotionally intelligent, smart-working woman who is able to take care of herself. I would love for her to go to college, unless she wants to go to Ohio State or University of Florida, then I hope she skips. I hope she finds a partner she can build a life with, who respects her for who she is and treats her like an equal because she is fully capable of living a satisfying life without being in a relationship. I am optimistic that she will find a career (or a few) that she enjoys and succeeds in, that will fulfill her and give her the freedom to explore life.

Job one for parents is to guide their children away from danger and propel them toward living their best life. Which means I have my work cut out for me, if what I want for my daughter really is what she needs and wants to live a full life.

Part of that work is helping her identify the misogynist disguised as an ally. 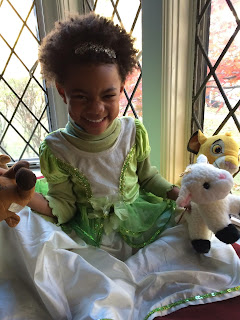 I met a budding motivational speaker not so long ago who casts himself as an ally for women. He consistently talks about relationships between men and women in terms of kings and queens. He's a well-dressed man who always has women around, but he's always looking for the right "queen". For men, he posts a full assortment of motivational tips, advice on how to empower yourself, and how to become a king. His pseudo-motivational posters for women implore them to hold tight, God's plan is for them to find their King. The message he's spreading is loud and clear, for a woman to have a fulfilling life, a man is needed.

The women who comment on this speakers photos are complicit as they express their need to be completed by finding a king just like him. His friends are complicit too, as they complement him for being such a great champion for women while not calling him out for his belief that women are not complete without a man.

What is troubling about the kings and queens narrative is that, with rare exceptions in history, queens need a king. They are dependent on a man to earn the title and dependent on that same despot to keep their title. They are expected to wait for him to provide for her, to be her salvation, to raise his kids and keep his concubine in order. The unspoken message behind this narrative is women should know their place, and it's always just a step behind a man.

Certainly, that does not have to be a queen's fate. But to a Papa that wants his little girl to grow into a fiercely independent woman, that once-a-century hope that a queen rises to power are pretty long odds. And the modern interpretation of what a queen is does little to quell my concerns.

BTW, beyond the misogyny, it's also a slap at anyone who identifies as LGBTQ, but that's a post for another day.