A random conversation at the Peninsula Grill

- July 08, 2016
There were four of us seated at the bar last night at the Peninsula Grill, a regular on the end to my left and a couple at the other end on my right. I purposefully picked the middle of the bar so I could watch the Tigers game while journaling in peace. Between finishing my soup and my whitefish arriving, I had managed to fill almost an entire page.

I write letters to The Kid in the journal. Someday, I will probably give it to her. Many of my letters are simple remembrances of the funny things she said, accounts of the astute observations she's made or me reminding her future self of the giving things she did as a four year-old. Some of the content is about my journey to becoming her Papa, and that can be deeply personal. She's also getting to an age that blogging all of it is no longer appropriate, she deserves her privacy, so I decided several months ago to start an old-school journal to preserve my memories.

After dinner, which was excellent, I continued to pour my heart out about my fears for The Kid's safety in light of two African-American men being killed by police.Statistically speaking, she is more likely to face suspension from school than her peers. The American Bar Association says, "African Americans, especially African American Women, suffer deadly violence from family members at rates decidedly higher than for other racial groups in the United States." A recent Catalyst survey suggested that for women of color, there is no glass ceiling. That glass has been replaced by concrete.

Regardless of how hard my erudite, loving daughter works, it seems her life has less value in American society simply because of her skin color.

While writing, I became very conscious of how little I know about the challenge she is going to face, and there is a lot that I can do to support her. I say how little I know purposefully. During my first marriage, a distant cousin felt the need to inform me that if my former spouse and I were to have kids, they would be black, as if that was a bad thing. I had to order dinner for two friends once when the waitress refused to even make eye contact with them. The parent of a former friend thought it was appropriate to tell me after my divorce that it was for the best because mixed race marriages never work because you know how black women can be (I was the reason for the divorce, by the way).

Every time I think I've seen a lot, I remind myself that I can still count  these instances on my fingers. I do not experience them every day, I can walk away. Women can't, especially women of color. My daughter will not be able to, no matter how much I want things to be different. I will never fully understand what life as an African-American woman in America is like.

What I can do is continue to learn, be supportive, and with my wife, make sure that The Kid has a loving home to rest her head in every night. I can continue to make a conscious effort to surround myself with people who have different life experiences, practice different religions, are of a different race or ethnicity, who have a different level of education, etc. so I have a better understanding, and hopefully in the process, continue to build a support network we all can trust.

As I was wrapping up my very emotional and rambling letter to The Kid, the woman at the end of the bar came over and asked me if I was a writer. I replied that I have a few ideas in my head, but my journal was a personal endeavor, not an exercise in becoming a better writer, which is what she had assumed. Someone once told her that the way to become a great writer is to go into a bar and right detailed descriptions of everything you see, which seems like sage advice. 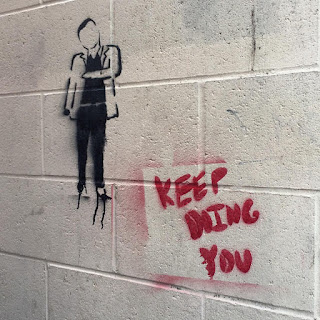 We talked for a few minutes while her husband ran across the street to the party store to pick up a few things before they went to her sister's house in Old Mission. Her brother in-law had suffered a stroke, so they were in town from Minneapolis to help her sister get ready to sell her home so she could better care for her husband. I know exactly where  the home was, I had lived about a mile from there my senior year of high school with my best friend at the time and his mother.

She asked if I ever thought of moving back home. I explained that Detroit is my home now, but I always enjoy coming back for a visit. In Detroit, we're 10 minutes from some of the best arts and culture institutions in the country, in the middle of a great food scene and I'm still able to contribute to the city in a way I don't think is possible anywhere else.

On their way out, it was obvious to even the most obtuse that she was sad by having to come back. She was the self-described black sheep of the family, and she was missing the connection that proximity to a place and the people you love can bring.

That conversation stuck with me in a way that was unexpected, and summoned me to pay more attention to something else I've been working on that will be valuable for The Kid to watch, too. I need to stop living small and do the work needed to accomplish the dreams that replay consistently in my head.