My Number One Farm Hand 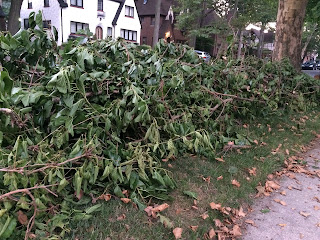 Our neighbor has a huge old mulberry tree that hangs partially over our backyard. We had part of it trimmed earlier this year because we noticed the base of the tree is starting to rot, and we were afraid of the potential damage a falling tree can cause. The location of the tree in relation to our electric service wire going to our house prevented the tree trimming company from getting everything off that tree that was over our property.

Friday night probably shouldn't have been a surprise then, but it was. A huge limb broke off, doing minor damage to our garage and knocking out our power for a few hours. Once our power was restored, work to clean up the backyard began immediately. I borrowed my grandfather's old chainsaw from my Aunt and Uncle to take care of the pieces I couldn't get with the garden loppers.

Tonight, we dragged the pieces I had cut out to the curb so the city crew who takes care of yard waste has more trees to make wood chips. The Kid wanted to help, and being an eager assistant, went to work trying to copy me.

I started calling The Kid my Number One Farm Hand last year, when I finally got over my self-imposed notion that it was a title meant for a boy. It clicked sometime last summer that Gumpy used it to show his appreciation of my gumption in following him around the farm.

Obviously, we do not have a farm. Our house in the city has a yard small enough for me to be able to mow with an electric push mower in under 45 minutes. But The Kid shows a lot of gumption following me around trying to do big kid work with a little kid body, so she's earned the title.

There was a lot of wood to move to the curb and it took the better part of an hour to finish the job, which was way too long for The Kid's attention span. But she gave it a good run for about half the time we were out there, which was much longer than I had expected. She doesn't care that she's still a little light for light work, she wanted to help and that's all I can ask for at this age.

Watching her drag smaller tree limbs to the curb with a proud smile and a determined look brought back a flood of good memories, causing me to pause a minute and recognize that I do indeed have a Number One Farm Hand.